After over 45 years in the industry there are five statements we hear over and over from our customers: Don't hurt my people. Don't shut me down. I don't have time to train my people. If I go down, fix me fast. Just get the job done. We listened. We took those statements and formulated our five customer values:

Every Lantech semi-automatic stretch wrapper and option are built with those values in mind. Many features have been designed into the machine, but if you are interested in ways to improve productivity or want to make it simple to wrap a safe-to-ship load, we have a variety of exclusive features and options that will help achieve those goals.

XT Cut and Clamp® 5.0 - Operators using a forklift to transport loads to and from a stretch wrapper must dismount to start the wrap cycle, then remount the forklift to take the wrapped load away. What's worse is that most often operators stand next to the machine as the load is being wrapped. This whole process takes about four minutes. The XT Cut & Clamp attaches the film at the beginning of the cycle and cuts it at the end so your drivers never has to get off their forklift. Two minutes doesn't sound like a lot, but average customers save about $10,000 per year!

Pallet Grip® - Sudden stops, starts or vibrations can cause loads to slide off their pallets during transit. In fact, 20 million loads slide off their pallet each year, resulting in $6 billion of damaged, unsaleable products. Protect your products by locking the load to the pallet with Pallet Grip. The roll up and drive down features avoid forks and creates a strong holding force at the base of the load.

EZ Weigh™ Integrated Scale - Over-estimating or inaccurate LTL freight weight is expensive, in fact it is a money maker for freight companies. Less-than-truckload freight companies collect $1 billion annually on reweigh fines alone. Know exactly what you owe by weighing your loads. If you are already weighing loads on a separate scale, wrapping and weighing at the same time can save up to 1.5 minutes per load. The EZ Weigh can also serve as a final quality check before your loads are shipped.

Load Guardian - Intelligent wrap setup is finally here. Load Guardian dramatically reduces operator skill needed to effectively stretch wrap loads. Instead of having to make as many as 12 difficult setup choices, the operator merely enters the load characteristics on an intuitive touch screen and Load Guardian determines the settings for a safe-to-ship load. If operators can use an app on a smartphone, they can use Load Guardian.

The right amount of containment force, everywhere on the load, is the primary indicator of a safe-to-ship load. 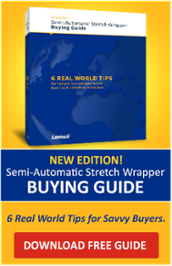 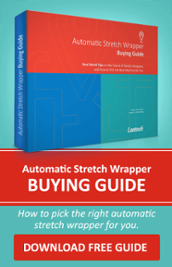 Make sure you periodically check your loads to determine if they fall within the guidelines. Use Lantech's Containment Force Recommendation Chart to find the right value and the CFT-6 tool to measure.

Containment Force Tool™ 6, commonly known as the CFT-6, is our patented tool used to measure containment force. It provides fast, consistent, and nondestructive measurements of containment force on pallet loads. Order yours today!

This exclusive technology is only available on Lantech stretch wrappers.

Lantech offers a variety of semi-automatic stretch wrappers that can wrap up to 40 loads per hour when customized with productivity enhancing options like the XT Cut and Clamp®.